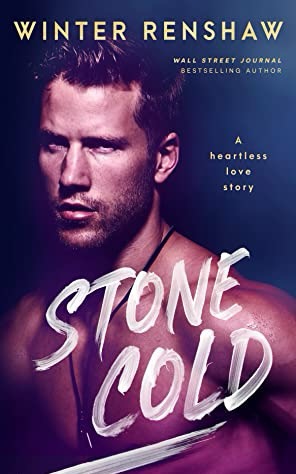 From #1 Amazon and Wall Street Journal bestselling author Winter Renshaw comes a scorching hot forbidden romance …
The most humiliating moment of my life begins with an early morning message from my ex’s notoriously heartless best friend.
Jovie—
In no way does this mean my opinion of you has changed.
I’m reaching out because sometime in the middle of last night you tagged yourself in Jude and Stassi’s engagement photo.
I don’t care if you were drunk or it was unintentional. I suggest you remove it immediately since the wedding is in two months (which I’m sure you know since you were clearly FB stalking them). The damage is done, but no reason to make things more awkward.
You’re welcome.
Stone
I waste no time removing my accidental tag before the sharp-tongued novelist in me fires off a response to the man who harbored extreme and inexplicable hatred of me during the three years I dated his best friend in college.
Only I didn’t expect him to respond.
And nothing could have prepared me for what he would say …
… or for all the ways this gorgeous villain with cruel icy blues would become the biggest plot twist my life had ever known.

The Hannaford Supermarket is packed on this Friday afternoon. I imagine we’re all doing the same thing; ditching work a couple of hours early, grabbing some dinner items, and heading home to kick off our weekend. I wonder if this is what Paul meant when he told me there’s no such thing as a unique experience.

I tuck a six pack of Heineken beneath my arm and head for the meat counter to grab a porterhouse and half a pound of stuffed mushrooms.

“I mean, what would you feed a dog if you had one?” A pony-tailed blonde in neon blue yoga pants asks a pimple-faced butcher.

“But if you did though,” she says.

“I’d probably feed him kibble, ma’am.” His eyes shift toward the long line forming behind her.

“I guess I’ll just take two sirloins,” she says. “The eight ounce, not the five.”

The young man wraps the steak in brown paper for her before sealing it with a sticker.

“Anything else?” he asks.

“That’ll be all, thank you,” she says before taking the package, turning on her heel—and walking right into me. “Oh my god. I’m so sorry. I didn’t see you there.”

In her defense, I was probably standing a little too closer, but the little old lady behind me kept inching closer to me, which made me inch closer to her and it became a big circle jerk of inching.

“Jesus,” I mutter under my breath when our eyes catch.

I’d know those Pacific ocean blues anywhere, the ones so effervescent they almost make me forget it’s been about a week and a half since I ignored her last message.

“Stone?” She squints, as if she doesn’t believe her eyes. Then again, I imagine I look slightly different than I did five years ago. Shorter hair. More muscles. Dressier clothes. Bigger big dick energy …

The little old lady behind me clears her throat, and I motion for her to go around me.

“I’m watching my neighbor’s dog and he’s refusing to eat. I think he’s depressed. I thought maybe if I got him a steak …” she shrugs. “What are you doing here? I thought you were in Baltimore?”

Our senior year in college, I was accepted into the University of Maryland School of Law that upcoming fall.

“Yeah,” I say. “I was offered a position up here from one of my law professors who was opening a practice here.”

Her lips inch into a wistful yet friendly smile. I’m sure it’s strange seeing me here—of all people. Or maybe she’s looking at me but thinking about Jude. It’s hard to tell. I imagine seeing me all these years later rustles up some old memories she wasn’t prepared to think about at the grocery store on a Friday afternoon.

The last time I hung out with Jovie was before the ill-fated Tulum trip. We were sitting around eating burnt frozen pizza from the campus convenience mart and downing cheap beer. And if that weren’t enough, Jovie forced us to play some God-awful card game where we had to shout certain phrases and clap and make fools of ourselves, but by the end of the night I was drunk enough to actually enjoy it.

The last thing I remember before passing out on the living room couch that evening was Jovie covering me with a blanket before adjusting my pillow so I wouldn’t have a kink in my neck.

I mumbled something to her about not being half bad.

Everything turned black after that.

Who’d have ever thought that would’ve been the last time we’d hang out, the three of us?

I doubt Jude did either.

“You know, I’m still waiting for you to reply to that last message,” she winks and crinkles her nose. “You left me on a cliffhanger.”

“I didn’t feel like answering it.” And it’s the truth.

“That’s your prerogative, I guess.”

I’ll admit, I debated sending her another clever deflection last week, but then I got busy with work and decided it was best just to leave it alone. Besides, some things are better left unsaid.

“You know Jude lives here too,” I say, leaving out any mention of Stassi because it goes without saying.

“You haven’t run into him yet?” I swear he’s never home. Stassi’s always got him running to this festival or that concert or this new restaurant.

She shakes her head, her ponytail flicking over her shoulders.

“I’ve only been here about a year,” she says. “I moved here with my ex … and I guess I haven’t gotten around to leaving yet.”

My chest tightens at the idea of Jovie being with someone new, some faceless pencil dick who probably doesn’t deserve her. From the second time we met, I knew she could never be mine. But even after Jude left her, I never once stopped to picture her with someone new. No need to torture myself.

We linger in silence for a beat, as if neither of us wants to go, yet there’s nothing more to be said.

Her full mouth curls at the sides, flanked by two perfect dimples as she stares up at me through a fringe of curled lashes. I’ve known far too many people who let themselves go after college. The stress of a corporate gig, a robust travel schedule, and a social life that revolves around drinking on the weekends tends to do that to a person. But Jovie looks even more beautiful than she did the night I first saw her.

There’s a calmness about her, as if these last several years in the real world have given her the kind of education she couldn’t get from a four-year institution.

Jovie waves her package of steaks. “I should probably get home and feed Domino.”

“Right.” I rake my hand along my jaw, taking her in for what very well might be the last time.

“It was nice seeing you though.”

Most of the time, when people say that, they never mean it.

She walks away, turning back once more. “You should really think about answering my question …”

She laughs before spinning on her heel and heading to the front of the store to check out.

A moment later, I realize I’m standing there wearing a dopey grin. I’m sure I look like a damn lunatic.

I wipe the expression off my face, get back in line, and order my filet mignon.

Years ago, I used to wonder what would be worse: Jude and Jovie getting married and me having to spend the rest of my life watching my best friend live happily ever after with her? Or Jude sending Jovie packing and me never having to see her again.

It never occurred to me that there could ever be anything in between.

Only I don’t know how I feel about it.

None of these scenarios end with me getting the girl. 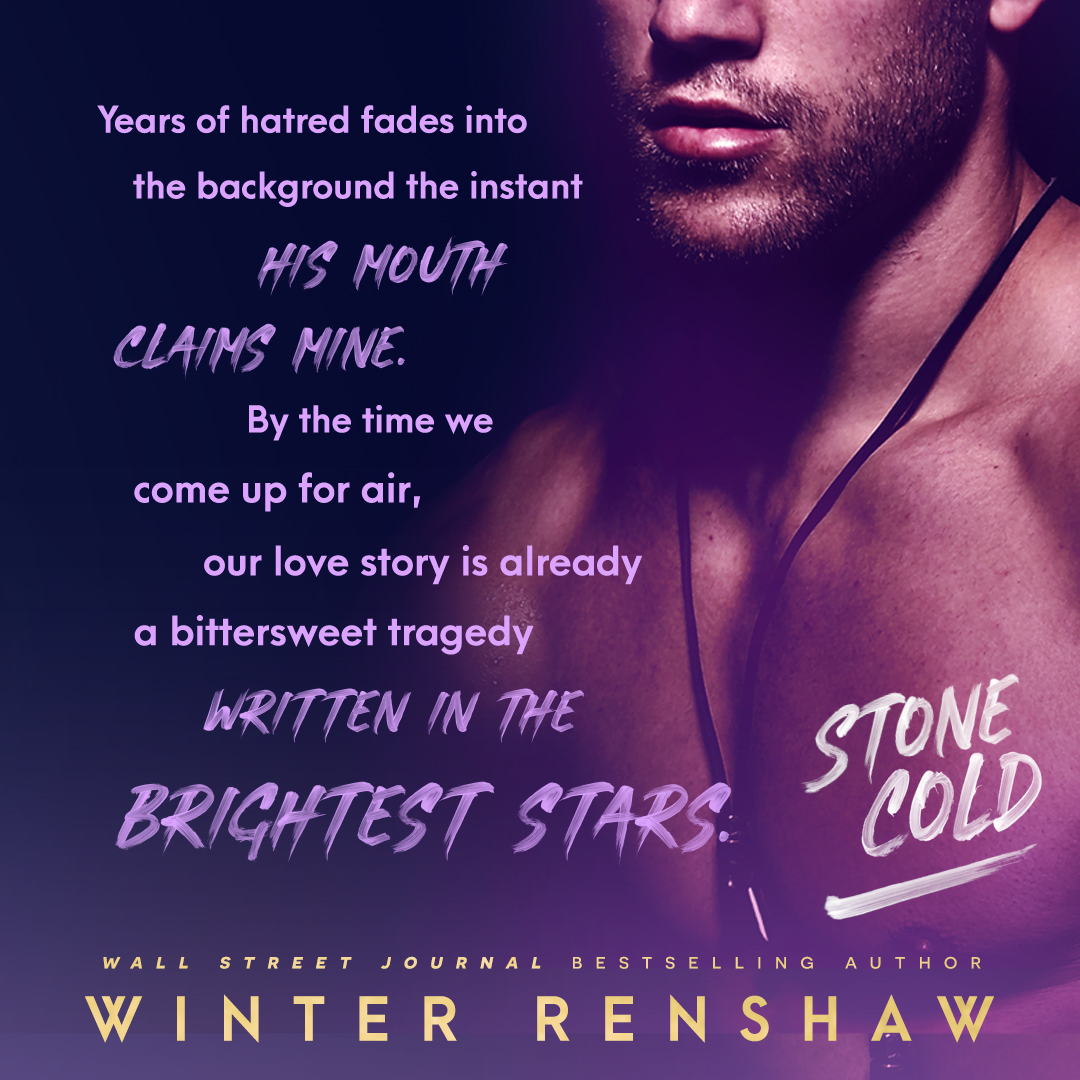 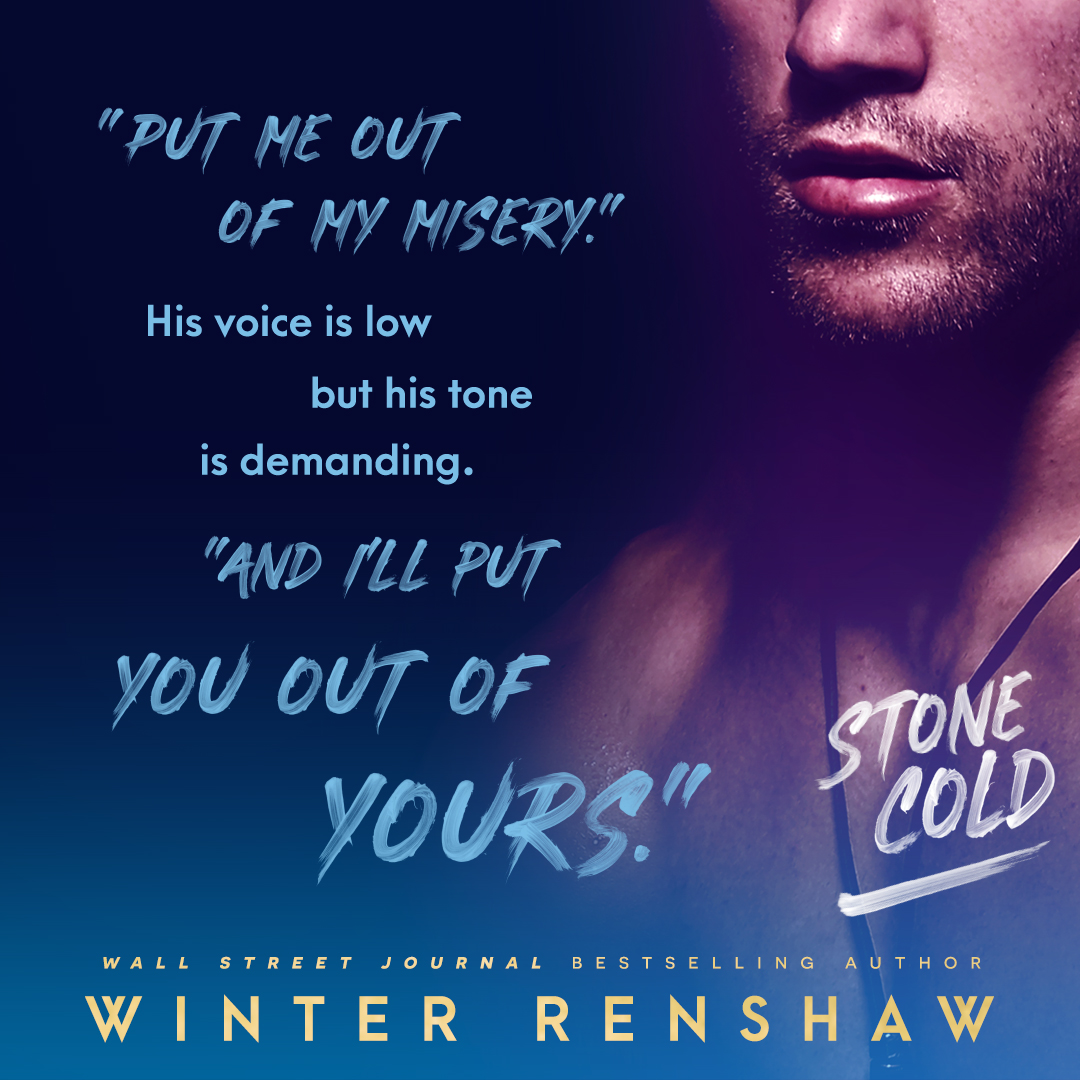 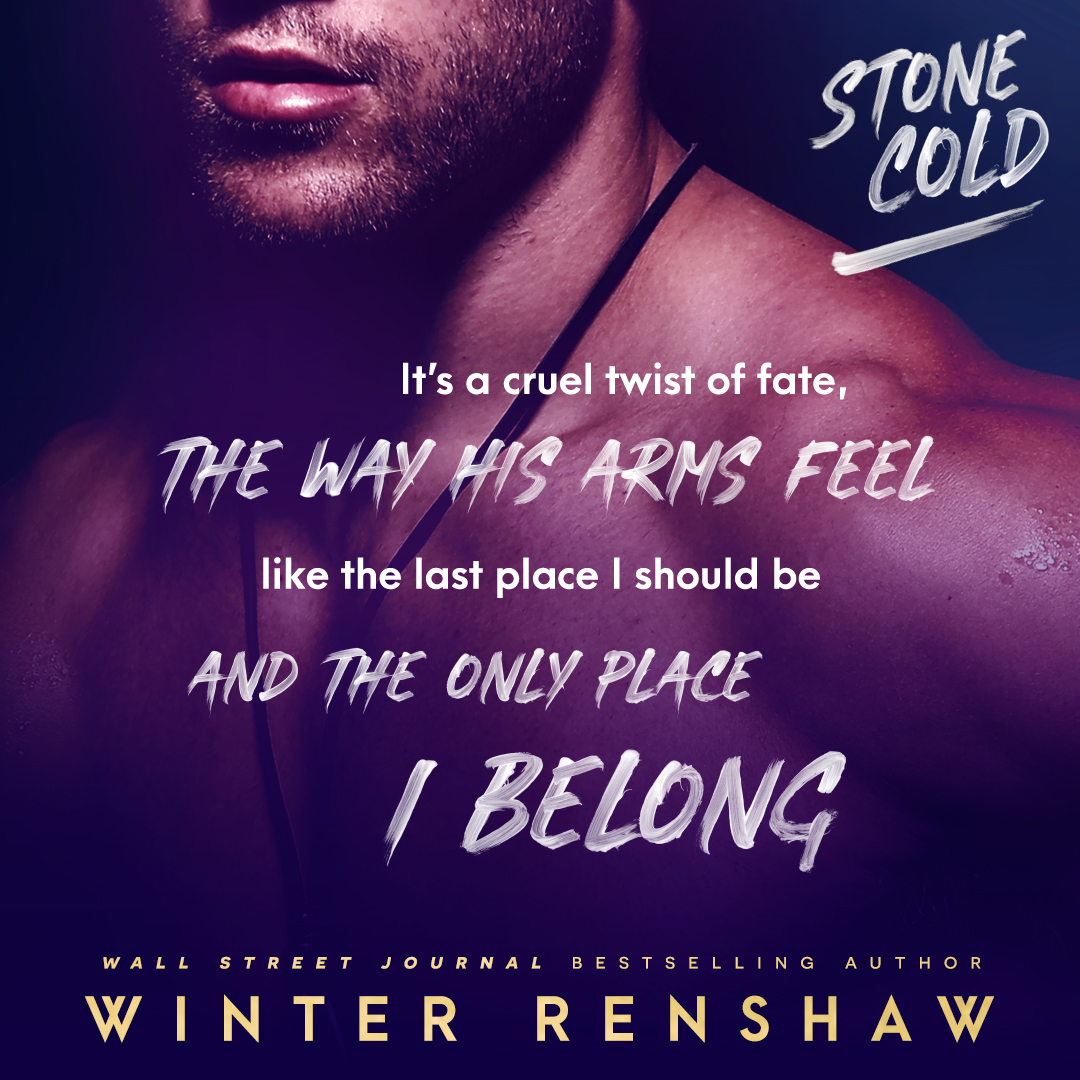 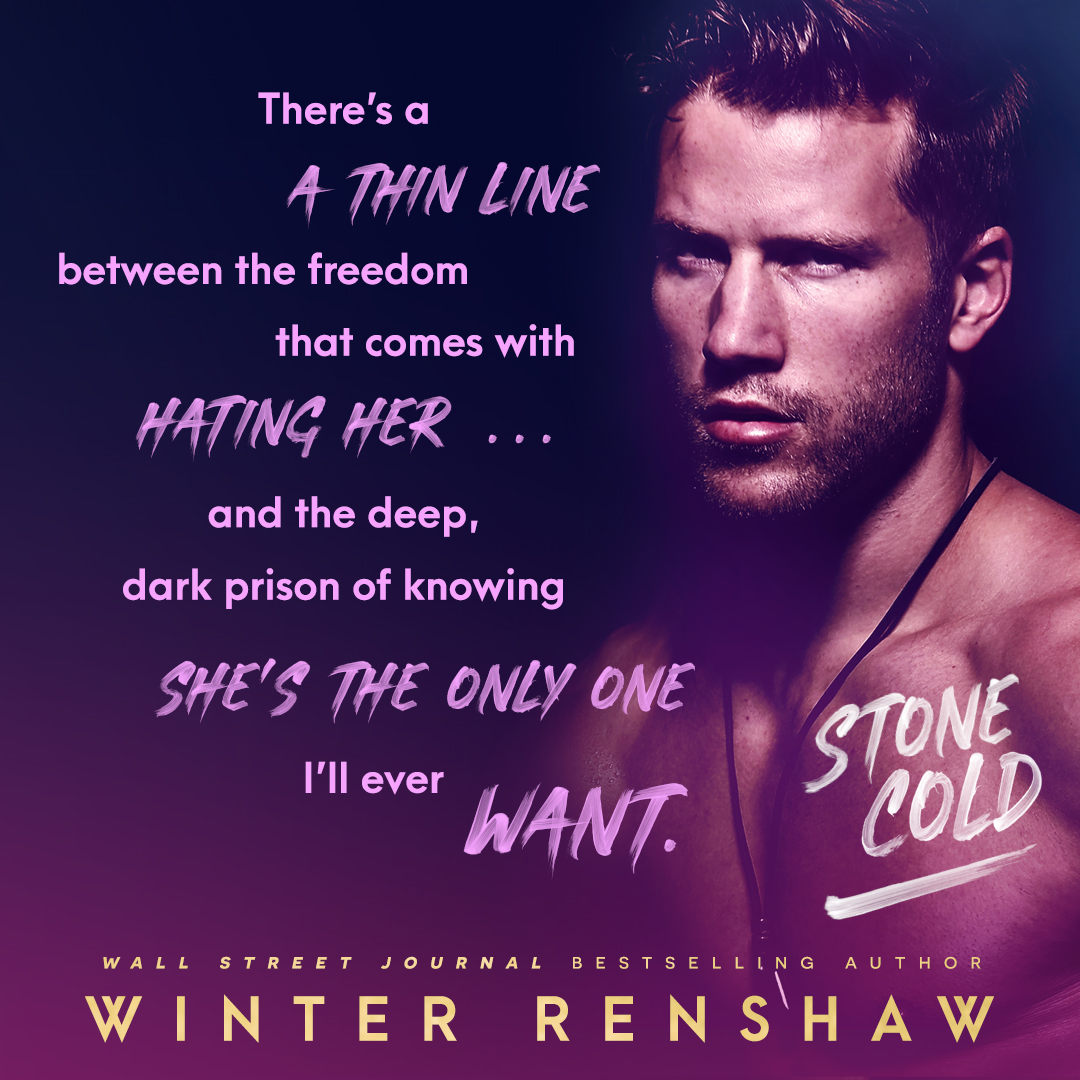 Wall Street Journal and #1 Amazon bestselling author Winter Renshaw is a bona fide daydream believer. She lives somewhere in the middle of the USA and can rarely be seen without her trusty Mead notebook and ultra portable laptop. When she’s not writing, she’s living the American dream with her husband, three kids, and the laziest puggle this side of the Mississippi.
And if you’d like to be the first to know when a new book is coming out, please sign up for her private mailing list here —> http://eepurl.com/bfQU2j