Sale Blast, It’s in his Arms by Author Shelly Alexander 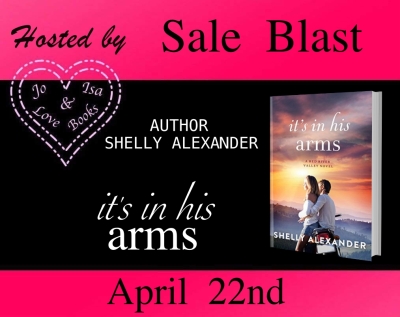 Lorenda Lawson has built a safe, sheltered life for her two young sons since their father was KIA several years ago. She has a beautiful cottage and a support network of family and friends. No one in Red River suspects that her marriage to Cam was ever less than perfect. Nobody, that is, except the gorgeous ex-SEAL who’s shown up after a long absence: Cam’s notorious twin brother, Mitchell.

Mitchell Lawson was a teenage rebel who fled Red River after the local watering hole burned down, choosing the military over jail. Now he has a new mission: making amends with the town and his sheriff father for his hell-raising days, while resisting the woman he’s always wanted. Between Lorenda’s warmth and sensuality and her boys’ mischievous matchmaking ploys, it won’t be easy.

When a string of fires breaks out, suspicious eyes turn toward Mitchell. Lorenda risks her reputation for his sake—but she’ll need to risk her heart, too, to bring this onetime bad boy home for good.

She is an Amazon #1 bestselling author in numerous categories, including contemporary romance, contemporary women’s fiction, and romantic comedy. Shelly grew up traveling the world, earned a bachelor’s degree in marketing, and worked in business for twenty-five years. With four older brothers and three sons of her own, she decided to escape her male-dominated world by reading romance novels…and has been hooked ever since. Now, Shelly spends her days writing novels that are sometimes sweet, sometimes sizzling, and always sassy. She lives in the beautiful Southwest with her husband and toy poodle named Mozart. Visit her at www.shellyalexander.net

Thank you for touring with Jo&Isalovebooks Promotions