Forgiving isn’t easy. Forgetting may be impossible.
Greg Mallory isn’t the kind of man to wallow just because he was left at the altar. Not when there are plenty of women to help him forget his heartbreak. But as the only Mallory son, he has an obligation to carry on the family name. When Greg’s runaway bride returns, his head tells him to keep his distance, but his body and heart are both begging for a second chance.
Faith Copeland bolted out of Darling Cove with a shameful secret and stayed away for ten years thinking Greg Mallory would never forgive her. Coming home means facing her past and Greg. She just didn’t think he still had the power to make her melt after all this time.
One moment alone proves their attraction is stronger than ever. Are they brave enough to start fresh? Or will past secrets destroy their second chance at happy-ever-after once and for all?

“Can I ask you something?” Faith choked out, pushing away the fear of her dream and letting her body’s natural attraction to Greg build inside to calm and soothe her.
“You can ask,” he coyly replied stepping closer to the bed.
She hadn’t meant to just…leave ten years ago. But guilt and confusion had hijacked her better senses. “Are you still mad at me?”
“No, Faith.” His voice was hard even though the response should have made her feel better.
It didn’t. “Good.” She nodded to cover up the sting in her heart.
His blunt answer hurt more than if it were a yes. That would have meant perhaps there were still feelings lingering close to the surface. No, meant he was over it. Over her. And Greg Mallory was too much of a man to wallow.
“Do you want me to go downstairs?” he asked gruffly.
“No.” She hoped her direct answer had the same effect on him. And the way she was looking at him, biting her lower lip.
“Me neither.” He took several heavy steps until his knees fell hard on the mattress.
The attraction between her and Greg had always been off the charts. It had confirmed the faith she’d had for many years that their bodies were made for each other. Fantastic sex had always been the tagline to their story.
Greg came at her with an open mouth while she licked her lips waiting for him. At first contact, his tongue was hard and firm taking control. He sat up and yanked off his leather jacket revealing a soft blue sweater underneath. He fell back on top of her, his fingers tangled in bundles of her hair. “God, you feel so good.” He dragged his lips along her throat, skimming her collarbone. “I want to touch every inch of you.”
“Go ahead,” she whispered, heady with passion while her bare legs wrapped tightly around his waist. She quivered and ached for him. Greg. Not just anyone.
Greg’s lips returned to her mouth. He kissed her holding her face and fisting her hair. The delicious spicy scent of him sent pools of heat straight to her core. Against his lips, she whined with pleasure.
When he sat back and fumbled with his jeans, she climbed forward. Her greedy hands mixed with his to get his pants off. She had to have him. Now! The zipper was part way down and Faith lifted her head to toss a mess of hair out of the way. Doing so caused her to focus on the two suitcases sitting in the corner of her bedroom.
The reminder that she was moving to London made her feel like she’d been slapped. Upon receiving the call to take over the bureau, she would be required to leave immediately.
Faith was going to leave. Again. 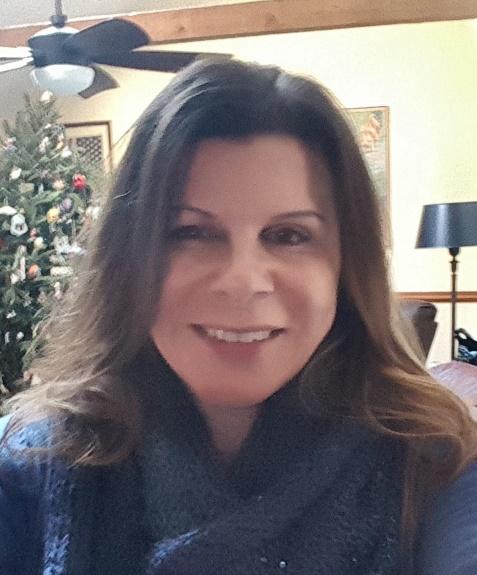 Deborah Garland is a computer and sports journalist turned author of women’s fiction, contemporary and paranormal romances. Her books are about love and the struggles of complicated relationships. The heroines are strong and witty and the heroes fall hard for them.
Born in Queens New York, she spent most of her twenties moving from place to place, ending up in New York City’s Upper West Side. It was then she met a handsome city cop/volunteer fireman from the North Shore of Long Island. Married ten years this August 31, they live an easy happy life with their two pugs, Zoe and Harley.
She loves to vacation up and down the East Coast, from Kennebunk Maine, to Virginia Beach, to Marco Island, Florida.
But her favorite place in the whole world is on a bar stool on a Friday night with a Grey Goose Cosmopolitan, listening to her husband tell her the same stories over and over.